Why does regular pump petrol sometimes cause problems for garden machinery?

If you’ve experienced problems with stale petrol causing poor running to your garden machinery, you’ll know how costly it can be to repair.

Modern day unleaded petrol contains ethanol. This can be as much as 7.5%, with a target set by the UK government to increase it to 10% in the next few years.

So why is this a problem?

If the petrol’s used within 30 days, there shouldn’t be a problem at all. However, a lot of us take much longer to use up a gallon of unleaded. If it’s stored for longer than 30 days, in an unsealed container, the ethanol in the petrol starts to react with the atmosphere, it actually absorbs moisture in the air.

The moisture from the air produces tiny droplets of water. You may still be lucky and not have any effect, but it’s worth bearing in mind that the smaller the engine, the sooner you’re likely to get problems.

The longer the fuel is stored, the more the water content will increase. This continues until it gets to the point where it can’t be held in suspension any longer and separation occurs. You’ll then be left with large bubbles of water, which when drawn into the carburettor, will cause blockages and corrosion. The first photograph shows an extreme example of this and the other photograph illustrates what the inside of a carburettor should look like. It’s also aggressive to plastic and rubber diaphragms quite often found in small carburettors. 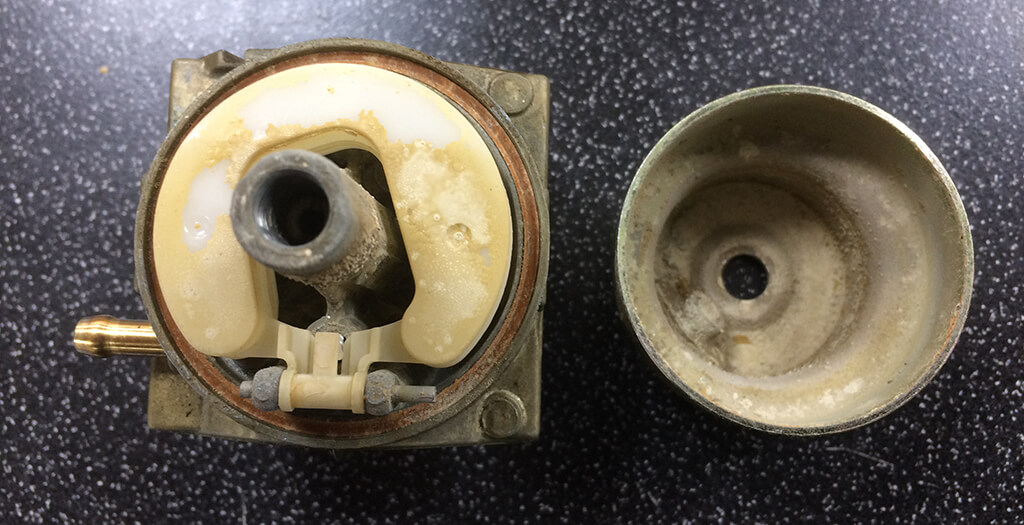 The inside of a carburettor which has suffered the effects of stale petrol: 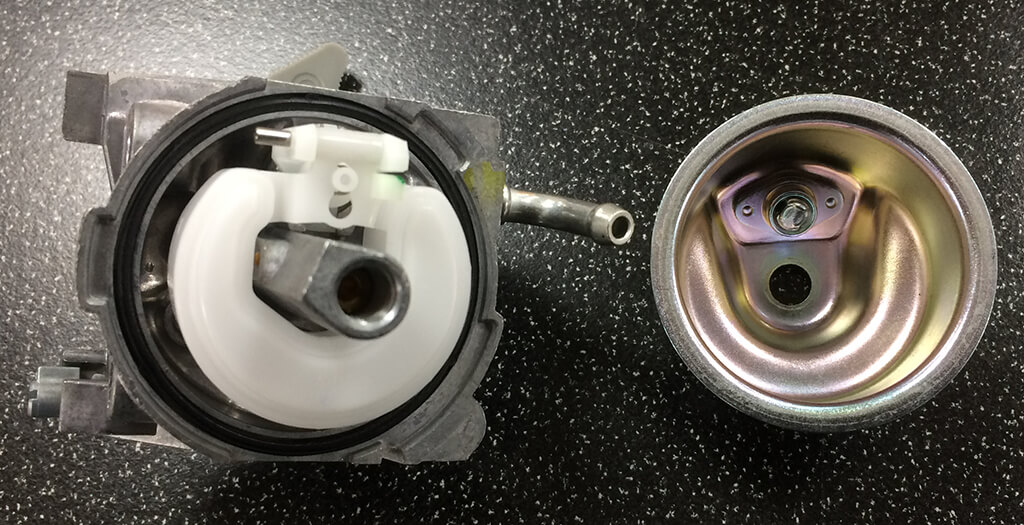 The inside of a new carburettor.

So why is ethanol used in petrol?

Ethanol (alcohol) is obtained from plant materials and is used in the biofuel industry. The production is much cheaper than other fuels and it helps with producing lower exhaust emissions. The UK government offers incentives to encourage fuel manufacturers to use ethanol.

why does it effect garden machinery, but not my car?

As mentioned before, petrol which is less than 30 days old, usually doesn’t have any problems and most of us refill the car more often than 30 days.

There’s also another reason. Most garden machinery uses a carburettor, which is a vented fuel system, unlike the sealed fuel injection system found on nearly all cars. 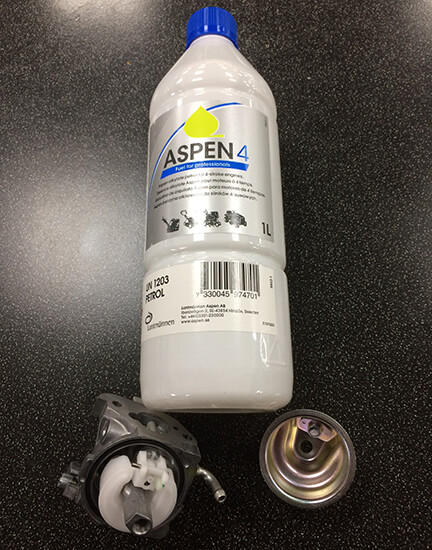 There are two options - buy smaller quantities of petrol if you can and make sure you never keep it longer than 30 days, either in the can or the fuel tank. The other option is to use ethanol-free fuel such as Aspen.

Aspen fuel (usually found at any garden machinery shop these days), has a shelf life of up to 5 years! Yes, it’s more expensive, but most garden machinery is extremely economical and if you do get carburettor issues due to ethanol, it’s likely to cost you an awful lot more.

It’s also available ready mixed with a biodegradable, fully synthetic oil for two stroke machines, cutting out the need to purchase the oil separately and mess about trying to mix it correctly.

There’s one more benefit to using Aspen alkylate fuel, it’s 99% less toxic than normal unleaded pump petrol and doesn’t have any carcinogenic hydrocarbons such as benzene. Aspen fuel is available in either 1 or 5 litre containers and we always keep plenty of stock.

I hope this gives you a better understanding of the problems found in using modern day petrol. If you would like further advice on this matter, contact us here at John Miller Garden Machinery and we’ll do our best to help you.